End of an Era

I realize I never post on Twins Chatter anymore, but last week such a monumental event occurred that it could not go un-commented upon. Lew Ford, the Official Player of Twins Chatter since early 2004, finally saw his roller coast career as a Minnesota Twin come to an unceremonious end on Thursday when he was dropped from the team's 40-man roster. As it turned out, 2004 was the high point of his career - in addition to the AMAZING .419/.471/.710 he hit during April (including 17 RBIs) he hit a solid .299 with 15 homers and 72 RBIs for the season. It truly was a dream season for Lew, the Twins (until that whole losing-to-the-Yankees-in-the-playoffs ending) and Twins Chatter.

But now that legacy, just like the legacy of TC, has come to an end. Let's all pause for a moment to remember all the good times that we had. 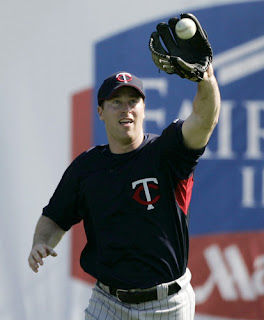