Reeling in the Big One

While much of the national attention on potential trades centers on Pittsburgh starter Kris Benson, the Twins are higher on Batista and might find his contract reasonable for a potential third or fourth starter.

The Twins could lose Brad Radke to free agency or retirement this winter, and Radke is making $10 million this year.

Batista is 8-5 with a 3.85 ERA and has pitched two complete games. People in the Twins' organization say he is reputed to be a good teammate. He would give the Twins a deep, strong rotation for the second half and alleviate pressure on top pitching prospect J.D. Durbin to quickly recover from early-season surgery.

The big question is what the Jays would demand in a trade. The Twins wouldn't want to take on salary and give up much in the way of prospects, but they have outfielders to give, especially with the emergence of Lew Ford as an everyday big-league player and Jason Kubel as a top prospect. - Jim Souhan, Star Tribune

First things first. Retirement? Souhan must be kidding. Radke is in his prime at the age of 31. He still has one very big contract ahead of him. Yes, he has already made plenty of money in this league but there is more then money to play for. Radke has never won the big one and he still has that fire when he pitches. He has never even had a major injury to hold him back. Retirement is not in Brad Radke's near future. Will he be a Twin next year? Now that is a question for another night.

Miguel Batista would be a great fit for this organization and not in the "great fit" way that Rick Reed was back in 2001. Batista should cost less in a trade then Reed did while being more productive. Much praise went out to the Blue Jays in the off season for signing him to such a reasonable deal. It's hard to believe that they would now turn around and deal him. Especially, when they consider what they got for Shannon Stewart last season. That said, the Blue Jays are a flawed team that has grossly underachieved at 39 and 46. They also play in a division where the window of opportunity is about the size of a pin. They need parts and the Twins might be able to offer some of the best young position players they are going to see with the opportunity of cutting salary to boot. Frank Catalanatto is not the future there while Mike Restovich might look pretty good in left field next year.

There is more to Batista then just being cheap. The guy is durable, flexible and able to pitch in a big game. He would plug in nicely in the void that is the Twins fifth starter spot while anchoring a spot in the rotation for seasons to come. If the Twins do lose Radke in the off season, Batista would show good planning on the part of the front office and really offset some of the growing pains in the rotation.

This year is what counts now though, and Batista would give the Twins a great chance to take the division. He might turn out to be a better pickup then Freddy Garcia. It took more then two starters for the Diamondbacks to win the World Series in 2001 and Batista came up big for them. In the World Series he pitched 8 innings and didn't allow a run. He started a game and came out of the pen as an invaluable piece. He was also a big reason they got there in the first place. That might make him a little more valuable then Terry Muholland being wheeled down in his wheel chair. Freddy Garcia has never pitched in the World Series. He has an inconsistent career and some might say that he is now overpaid. To get him, the White Sox only had to give up two future cornerstones.

Miguel Batista would be a better long term pickup then Kris Benson and might end up costing about the same. Benson may have a better arm but Batista has more experience. The Twins would probably enjoy getting Benson's contract off the books following the season but then wouldn't have anything left of what they gave up to get him. Batista would make it easier to justify giving up someone like Restovich for a push the Twins need to make. They would then have him for next year’s run. The price is steep but the results would be more then worth it.

Twins Win!
Complicating matters is the way Terry Muholland has pitched in his two starts. Nothing more could be asked of him. He has kept the Twins in ballgames and given them the chance to win. The Twins should not mistake this for a trend. In the end Terry Muholland is still Terry Muholland and this is not 1993. No matter what deals the Twins pull off, their organizational depth is lacking starters at this time and it needs to be addressed. For now though, we can all bask in last night's 7-1 victory against the Tigers. The Twins continued their winning ways and we all wont have to gut out another Muholland start until after the all star break. It is great to see the team fly into the break this year as opposed to the way they limped last year. Hopefully they can carry the momentum through.

On a personal note, this will be my last entry for a couple of weeks. I finally broke into my savings and am spending the next two weeks in France. I will follow that with another two week trip to New Zealand 10 days later. Please be patient with Twins Chatter in the meantime. Ryan will be all by himself and I'm going to sadly be out of touch with what's going on over here. I will try to stay up to date but who knows what kind of internet access I will have over there so any postings will probably be short and random. Ryan is up to the challenge of taking on the whole site in my absence but if he has an off day or two here and there no one can really blame him. My biggest regret is missing the All Star game. I hope Nathan comes in and gets the save in the ninth striking out the side and Bonds goes yard. Hey, maybe Clemens and Piazza will duke it out right there on the field! That's enough rambling for me tonight, take good care of my team while I'm gone.

John
johnbetzler@hotmail.com
Posted by john at 11:07 PM No comments:

What a Difference a Week Makes...

That one little word sums up the Twins’ recently-completed three game sweep over the Kansas City Royals perfectly. In fact, the Minnesota Twins have never dominated an opponent as utterly over the course of a series as they did KC over the past three days. The last team to throw three straight complete game shutouts in a single series was the Orioles against the Tigers back in 1995, and it has only been done four times since 1973. The only other time this franchise accomplished such a feat was way back in 1913 when the team was still the Washington Senators. A few head-to-head stats from the series:

I could go on and on, but I won’t. It’s safe to say that the Twins completely and utterly dominated the lowly Royals these past three days, in just about every facet of the game. In fact, I could have sworn that the name on the front of the Royals’ jerseys said “Omaha” instead of “Kansas City”. That’s how poorly they played. While I’m ecstatic that the Twins played so well, I’m also saddened by how far the Royals have fallen over the past few months. Despite the fact that they are divisional “rivals” of the Twins, you can’t help but root for a fellow small-market team, especially one that showed as much character and spunk as the Royals did last year. I personally didn’t think that the Royals were for real before this season began, but no one could have foreseen how far they would drop off. It really is a little sad.

Now, back to our beloved Twins. Seems like a lifetime ago, but it was in fact just one week that we here at Twins Chatter (ok, it was just me) were hitting the panic button after getting swept handily by the White Sox in three games. At the time, it looked like the balance of power in the AL Central had shifted; the Twins were no longed the hunted but had become the hunters. Many people said the ChiSox were on the verge of running away with the division.

Not so fast! Since last Thursday, the White Sox have lost five games in a row, including last night’s 12-0 pounding at the hands of the Angels. The Twins, in the meantime, have won five of six, all of them in rather convincing fashion. The Twins turned a two-game deficit into a two-and-a-half game lead in a span of six days. Six days! Talk about playing the right teams at the right time. Kyle Lohse wasn’t quite as brilliant as either Radke or Santana on Wednesday, but he was more than good enough to beat the hapless (and punchless) Royals lineup. The Royals had a grand total of three bona-fide major league hitters starting against Lohse: Angel Berroa, Ken Harvey, and Matt Stairs. And none of those guys are nearly as good as either Mike Sweeney or Carlos Beltran.

With the All-Star break quickly approaching, the Twins sit with a record of 46-37, which is well ahead of last-year’s pace when the team stood 7.5 games out at the break. Sometime during the All-Star break I’ll have a detailed “Half-Season in Review” post, so be sure and look out for that. The Twins start a four game series with the Tigers starting today (Thursday).

NOTE:To all of my fellow bobblehead fanatics, listen to this! The Twins recently announced a Joe Mauer bobblehead giveaway on October 2nd! Now there’s a collectible that will be worth something! 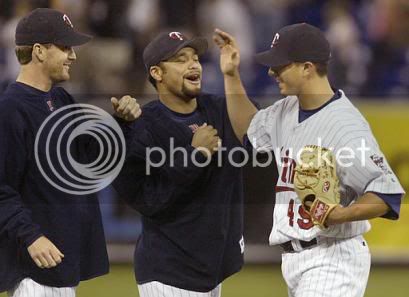 The "Three Amigos" of Radke, Santana, and Lohse all pitched complete game shutouts against the Kansas City Royals this week